Exploring Grenada's history of the time before 1650 when the european conquerers permatently settled is not so easy. We went out to find the indigenous Petroglyphs at Dusquene Bay and at Mt. Rich.

Let's first take a moment and do the basics. That's where the difficulty begins. From which era are the Grenadian Petroglyps and who created them? I am hoping for some feedback to this post, because I still don't know!
The most extensive document seems to be the publication 'Petroglyphs of Grenada and recently discovered petroglyph in St. Vincent' of the Museum of the American Indian, Heye Foundation from 1921.

This document makes a suprising statement: "It cannot be affirmed that the Petroglyphs of Grenada are a product of the Carib period of occupancy; it is more probably that they represent the culture of former occupants of the island".  The boulders at Mt. Rich are usually referred to as 'Carib's Stone', you will find them under this name in our map, too. But this might not be correct.

The boulders with the Petroglyphs are just meters away from the bus stop at Mt. Rich. Nevertheless they are not easy to find. But more about this in a later chapter.  It's accurately marked on our map:


Our guide (the legendary Telfor Bedeau)  made sure beforehand that we were allowed to walk downhill through the private property next to the bus stop to access the river. We bravely followed him barefooted through the river, as he cleared our way through the dense vegetation with his cutlass. 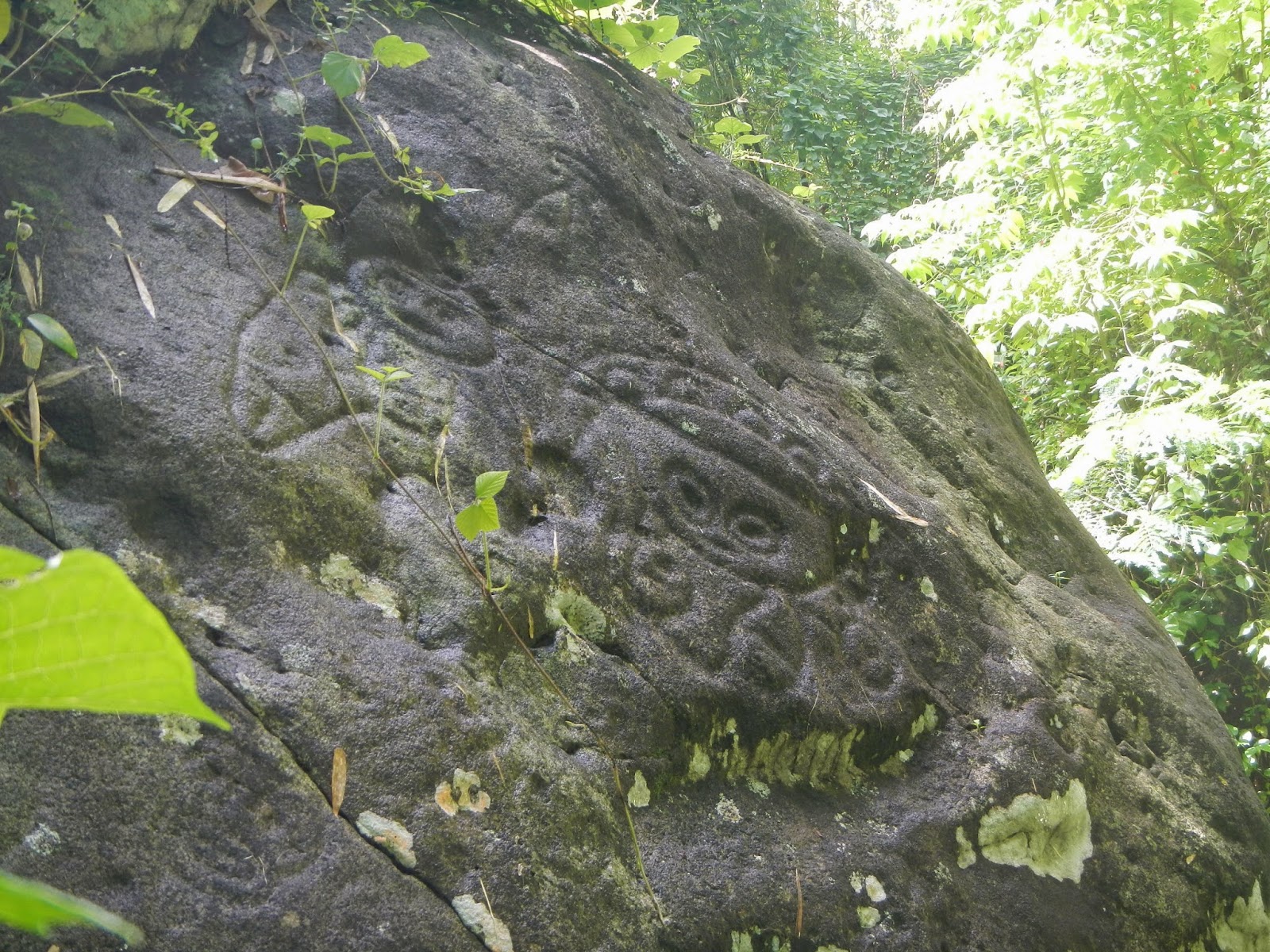 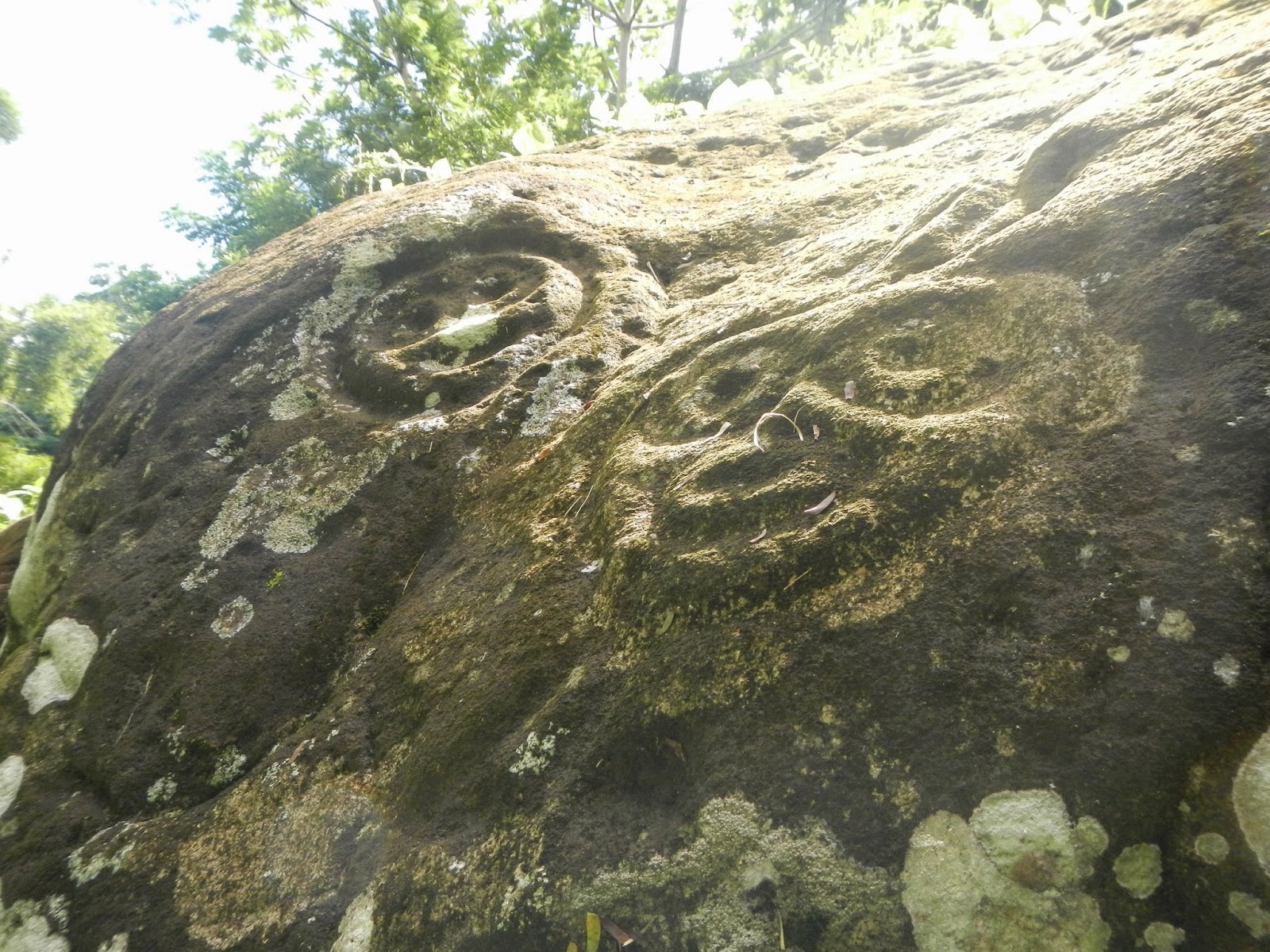 At the beach at Duquesne Bay, we had to ask some locals and then found the Petroglyphs at the southern end of the beach. 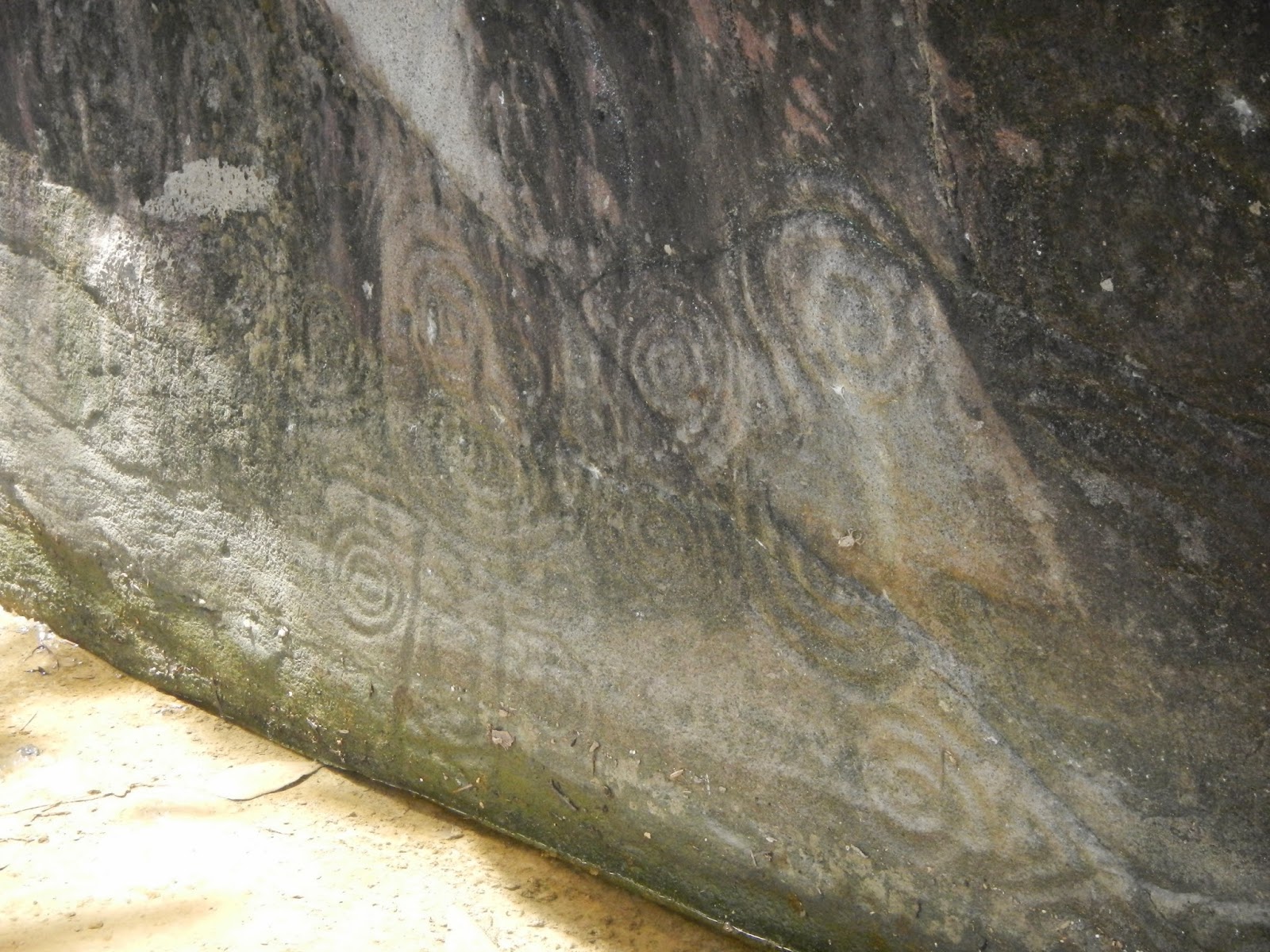 There was stagnant water all around the boulder, inside the concrete wall which surrounds the site. Since it was the high time of the Chikungunya epidemia in Grenada, this was a perfect breeding place for mosquitos. We only stayed for a short time.

Current status of the Petroglyphs 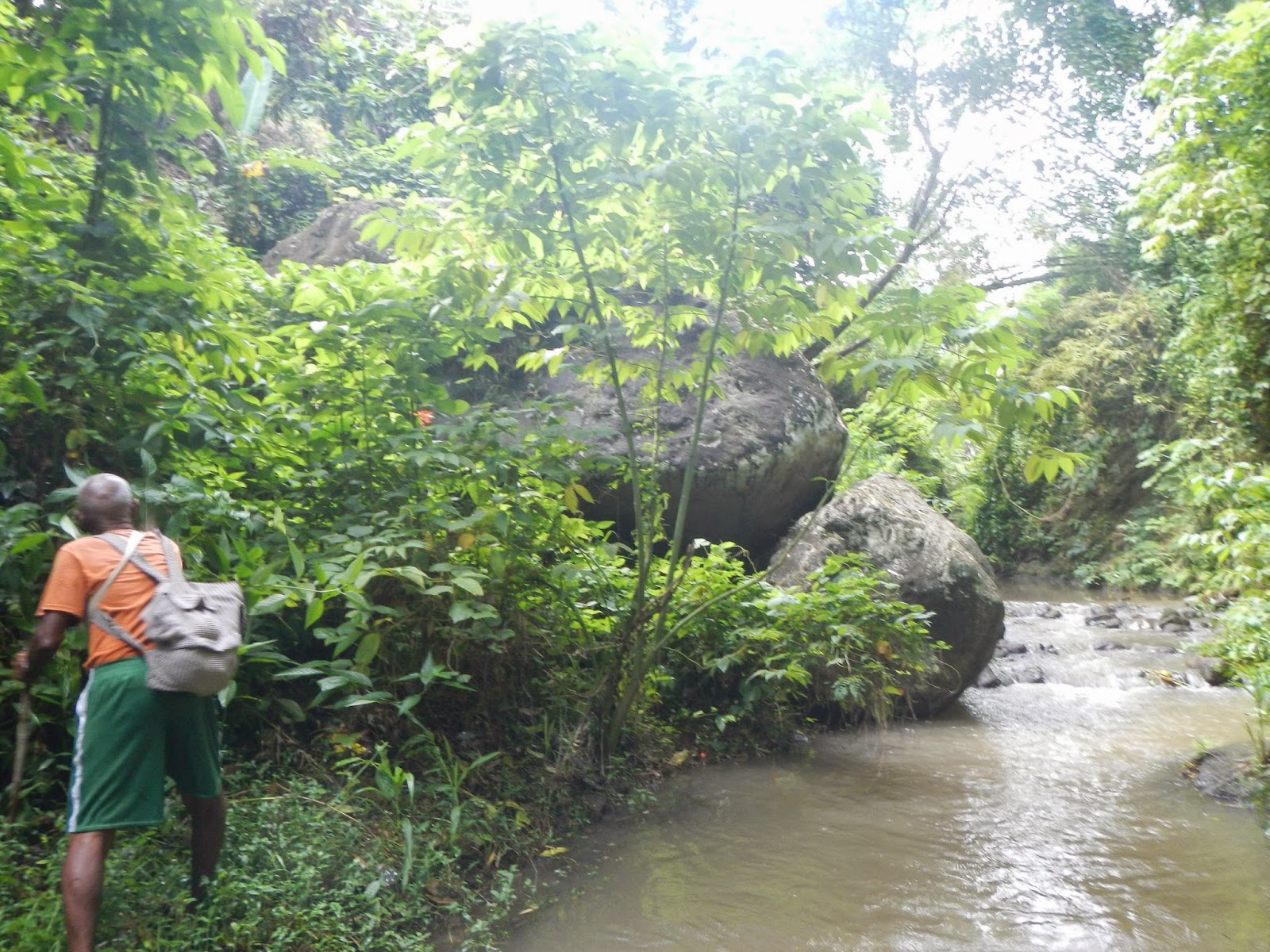 Generally it can be said, that these important historical relics are in great danger and should be better preserved. This is the result of the study Evaluation of Grenada's "Carib Stones"[...]  by the Unversity of Colorado and Arkansas.
Additionally we found that location at Mt. Rich is currently 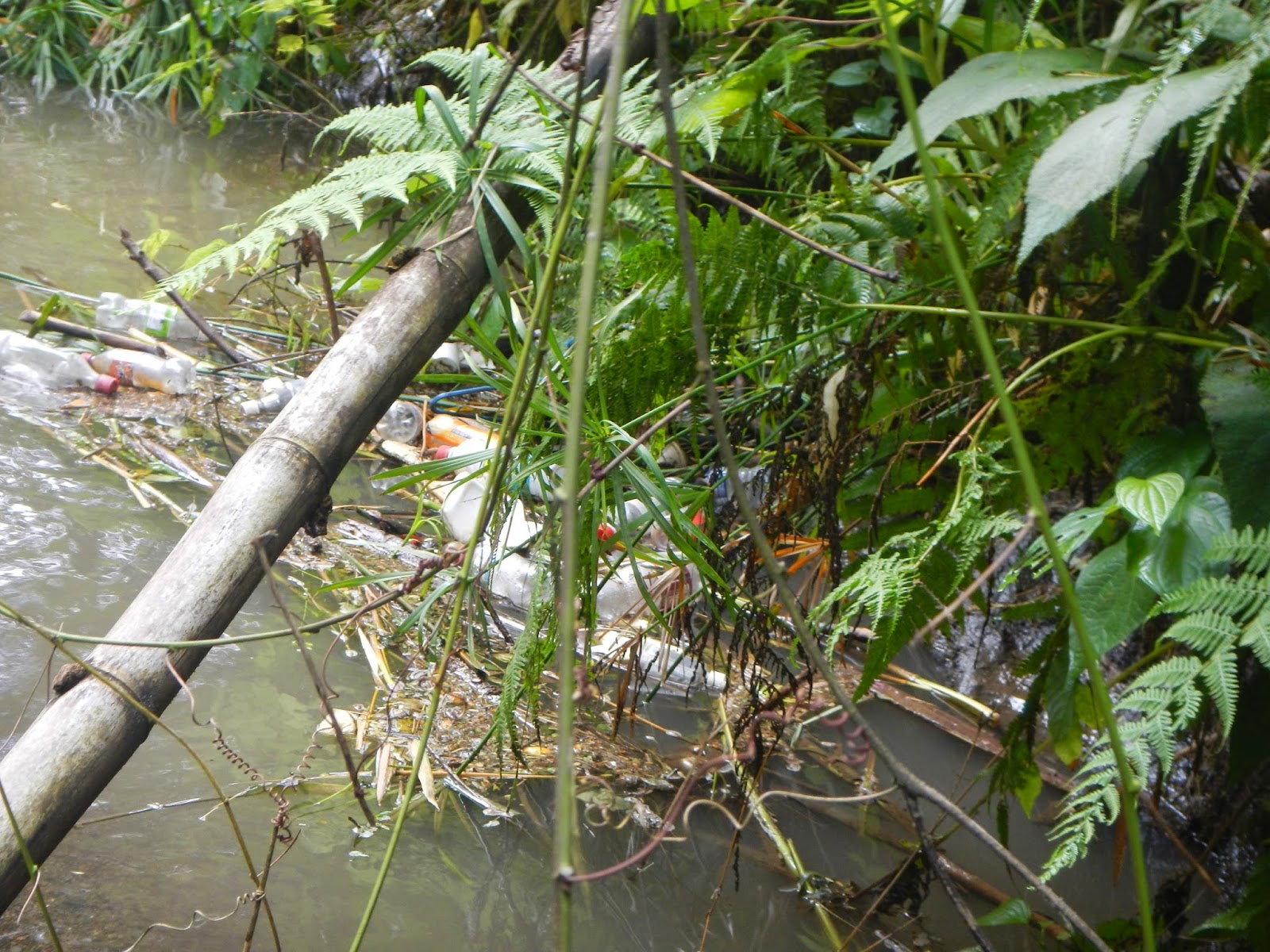 Much room for improvement on this front. We think that the Petroglyphs would be an important asset for the tourism industry if they were kept in better condition.